Get to Know a Bit More About Secret Weapon

It turns out that I’ve

been a secret weapon all my life.

I was 13 years old in 1975 and my parents decided to start a cultured marble business. We served the residential construction industry and my mom excelled in, what was at that time, a man’s world. I was able to leverage her time by managing the phones, light bookkeeping, helping customers choose their colors and various details, documenting changes and troubleshooting when someone needed help.

By 1980, I moved into sales which required visiting job sites for meeting with clients, getting measurements, preparing estimates, writing up orders and even some design work.

In between times working at the marble shop, I spent a couple years in banking – first as a teller then in customer service (which has a heavy emphasis on selling the bank’s products). Spent a year at an advertising agency in reception which included two businesses on seven phone lines. Then another year working for a high end cabinet shop in sales.

In 1990, expecting my first child, I obtained my real estate license and used my previous customer service skills to run the model home and office for the new family custom home business. Eskew Homes offered top quality mid-priced custom homes in a subdivision where the lots were developer owned. We built a model and courted homebuyers, held their hands through the process of customizing their home and cheered with them when move-in day arrived. Building a home from a set of drawings to reality can be super stressful on a person or a couple. I learned early on to be very good at asking questions that are sometimes taken for granted. This way, there were no ugly surprises for my clients. Ferreting out unacknowledged expectations became one of my most valuable (to me) skills!

I became a stay at home mom until ’95 when my second child was close to two. I started marketing with ‘the Door Knob News’ where I offered local businesses a way to capitalize on sales collateral which would normally be thrown away eventually. I got cute little plastic bags and for 10 cents a piece I’d put their flier in the bag with at least nine other fliers along with a little newsletter. Then, with my daughter in the baby seat, we’d bike over to a near subdivision and hang bags on doorknobs. It was a couple hundred bucks for each subdivision but I could do a couple per month and that made a huge difference in our one income household!

In 1997 I joined a firm that recruited actuaries as an administrative assistant but the actual job was data entry, computer and program maintenance and networking, keeping the 6 recruiters tech going. It was from this office I witnessed the horror of 911 – many of the actuaries we worked with and for were in those buildings that day. Ask me someday how this job was a miracle and an answered prayer!

In 2002, I became a stay at home mom again and began homeschooling our kids as we traveled the US and Canada as missionaries presenting the mission the Lord had laid on my husband’s heart. What an adventure! Suddenly I was CEO of a school and a travelling ministry! Writing this has made me realize how effective I am at setting up processes to accomplish the goals before us!

In 2004, we had settled in Kapuskasing, ON with my husband the missionary-pastor of Kapuskasing Baptist Church. I continued to CEO our schooling and our ministry reporting (Newsletters, budgets, school reporting, events at the church and in our home.)

In 2007, it was time to move on and this time we were in Southern Ontario between Barrie and Orillia – most notable in regards to business life during this time: I rented a beautiful home, made all the arrangements for our move and did it all via email and phone.

I also managed to obtain my legal permanent resident status without an attorney (so I am fairly good with legal documents and legal jargon) essentially earning $5k for doing it myself!

2008 we found Espanola, ON and purchased a home and got moved in, in time for the kids to start high school. I mention that in regards to business life because there were some hoops to jump through to correlate the schooling they’d had at home with credits in the public system. We also laid the groundwork and the marketing and promotion for a week long meeting to which the public was invited to witness the birthing of Faithful Providor Baptist Church to take place in June 2009.

In 2010, I drove into Gerry & Zoe’s life at Nurturalhorse.com. Mainly I was looking for permission to bring my youth group out to play with horses. But what I got was a job! On top of all my other jobs! I started out by working in the office – answering calls, handling the email, managing the ecommerce store, ebay store and shipping orders. That morphed over time to managing all the sales – distributors, wholesale, and retail.

That brings us to August 2016 – it was on a Friday and I noticed a post on a Facebook group of which I am a member. My now friend and mentor Kathy Hadley, Kathy Hadley Life Coach, was asking if anyone had experience with Thunderclap. I didn’t know what it was so I looked it up. It’s a ‘crowd-speaking platform’. I said I didn’t know that one but I did know Headtalker. That started the ball rolling! Now, everyone who knows Kathy knows that when she is on a mission, she goes at the speed of light! So I was explaining what to do and she interrupts to say…”I could learn it but I don’t have time, could you do it?? I’ll even pay you!” I had not thought of charging for helping but she insisted and we settled on a price and by the end of Friday night we had two identical campaigns (click here to see one, click here to see two) built out to promote the release of the book she co-authored. It was set to launch on Sunday morning, so we had two days to drum up some excitement and get the word out!

I am super excited to report that her book launched on Amazon with a crowd-speaking reach of over three million potential views – by the end of the day the book was #1 International Bestseller, and #1 in several categories in the US and Canada!

From there Secret Weapon Media was officially born.

It is my greatest pleasure nowadays to be the catalyst for people who are stressed out over what they ought to be doing to actually increasing productivity so that they are getting their life’s work accomplished. And doing it with less stress too!

I hope, since you stuck with this to read basically a resume of what I have done, that you will give SWM the chance to help you realize the completion of goals, the implementation of new plans and ideas and get you back to doing the thing you went into business to do! 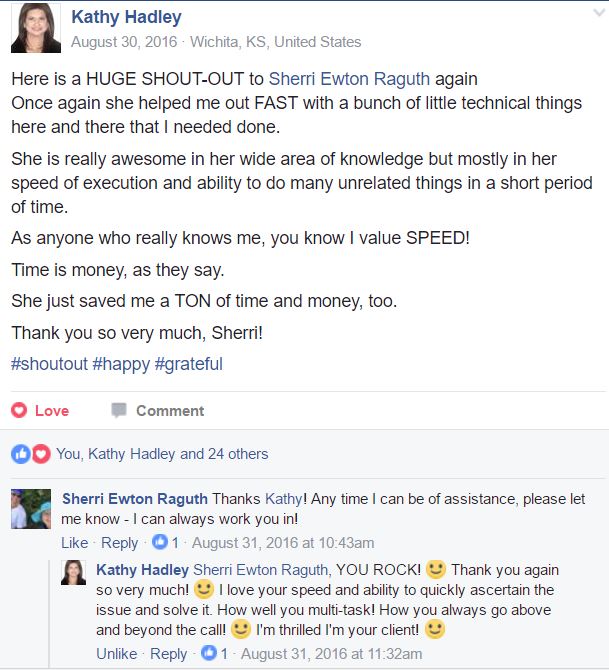